When Impact and Distribution Come Together

Let's take a closer look at how some of the film teams featured in our library combined traditional distribution pathways with more innovative strategies to target and engage audiences while keeping front and centre the change goal, the primary change dynamic at work and the target audience that needed to see the film the most in order for it to make a difference.

Changing minds: The Act of Killing

The Act of Killing team hoped to catalyse a fundamental change in how the 1965-66 genocide was understood, both in Indonesia and internationally. In the language of Impact Dynamics, they needed to change minds. But political censorship prevented the distribution of the film in commercial cinemas in Indonesia, so whilst a traditional distribution model was deployed for the film's international release (including a major run of film festivals and continuing with cinema releases in multiple territories, culminating in an Oscar nomination), a different approach was taken to allow the film to reach the Indonesian public.

Starting with invitation only screenings, the team avoided the need for the film to be reviewed formally by censors (which could have led to a ban, making it illegal to even own a copy of the film, let alone screen it).

Working with civil society and human rights groups, as well as a host of other partners, the film team opted instead to run covert ‘invitation only' screenings for key Indonesian influencers. Harnessing the power of opinion-forming journalists, writers, educators and historians allowed them to then open up a public discourse about the reality of the genocide for the first time in history. As the campaign gained momentum, eventually the team were able to arrange public screenings in Indonesia itself and the film was geoblocked for free download across the country.

It's worth dwelling for a moment on the range of different screenings that the film team deployed. With audiences ranging from 30 to over 700 people, the team worked with civil society groups to identify where and how to show the film, from a remote jungle location where locals gathered around an old tube television, to the biggest multiplex in Jakarta, where people crammed in and stood in the aisles. 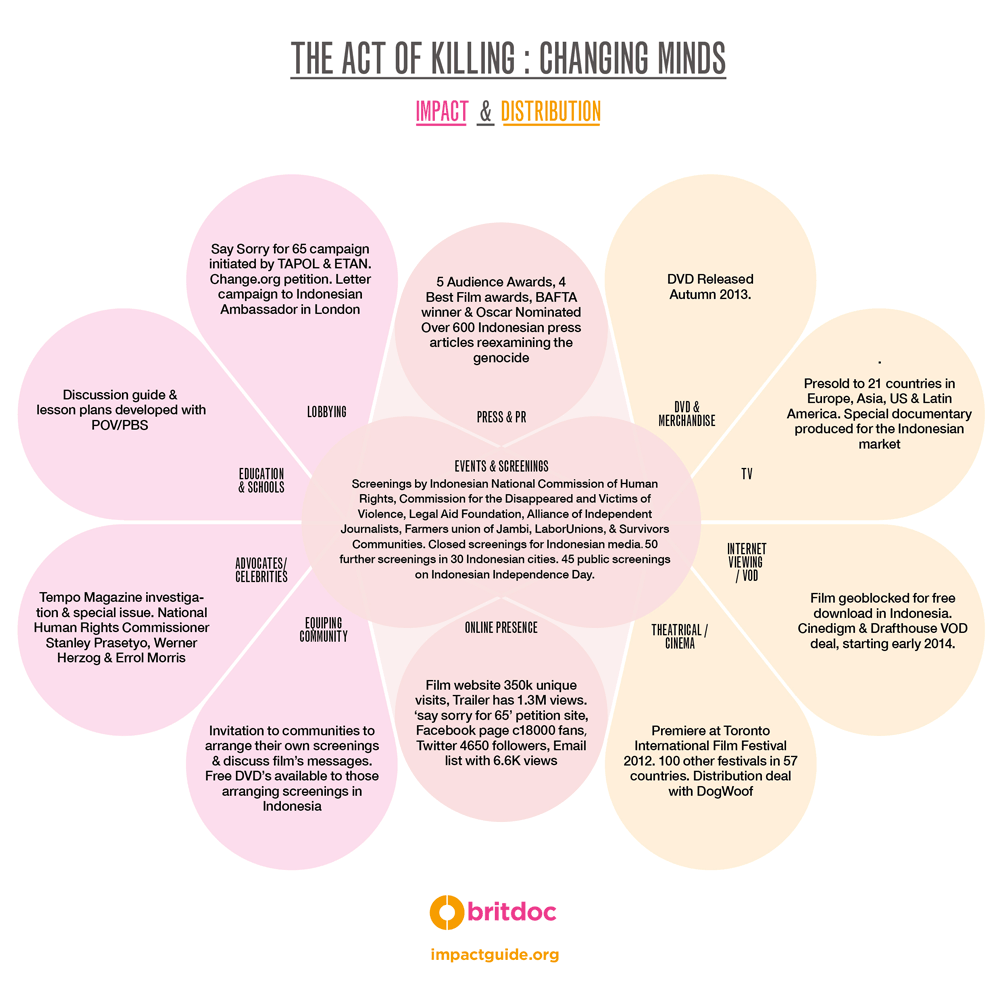 Another example of changing minds is Miners Shot Down.

The Weapon of War team worked with the army to deliver screenings and educational materials at military camps throughout the DRC. As screening options were limited within the country, the filmmakers set up their own Mobile Cinema Foundation, allowing them to show the film in a variety of locations, from remote villages to military camps. By doing this, the film team managed to reach around 35% of the entire military population, as well as rebel fighters and other guerrilla groups.

Special edits of the film were made, each addressing a number of important topics related to human rights and military conduct and, after each screening, a programme of debates, discussions and other educational tools was delivered by specially trained facilitators. The film team then went on to produce two further edits of the film, specifically designed for young people and couples, addressing the issue of sexual violence and working with local community and civil society groups to promote discussion and dialogue around the film's themes.

Outside of the DRC, the team opted for deals for the TV and cinema rights to the film, and it was also shown at a number of relevant international film festivals, including the International Film Festival on Human Rights. However, they retained the right to sell DVD copies of the film itself for educational purposes, and this allowed them to continue to reach relevant audiences in both DRC and beyond with the film's message. 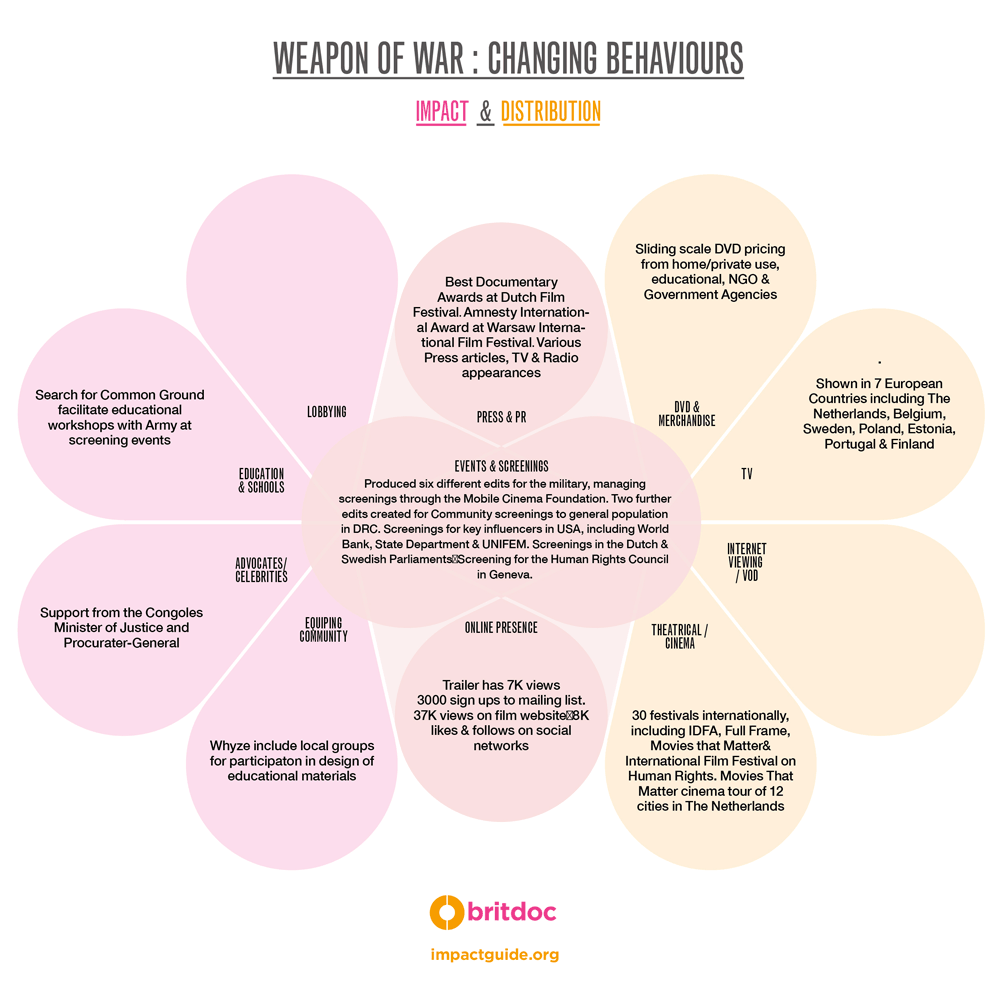 Another example of 'changing behaviours' is Blackfish and Chasing Coral.

The Invisible War film team focused their efforts on lobbying influencers, sharing the film with them some months before the its full cinematic release. After the film's world premiere at Sundance, the team went about using non-theatrical screenings on Capitol Hill to recruit advocates to the campaign and to mobilise support from those at the highest levels of government for policy change. This allowed momentum to build before the film's message gained traction in the more traditional ways.

Continuing their work with a sustained publicity campaign which included speaking engagements, interviews and social media activity, by the time the film had been nominated for an Academy Award, policymakers and government were under significant pressure to introduce legislation. Cinedigm took theatrical rights and, whilst the film only took $60,000 at the box office, the team's impact distribution strategy has meant that the film's impact and reach extended far beyond those who had paid for a ticket to see it at a cinema. In the United States the film was shown on HBO, and Roco Films International took the US educational rights. 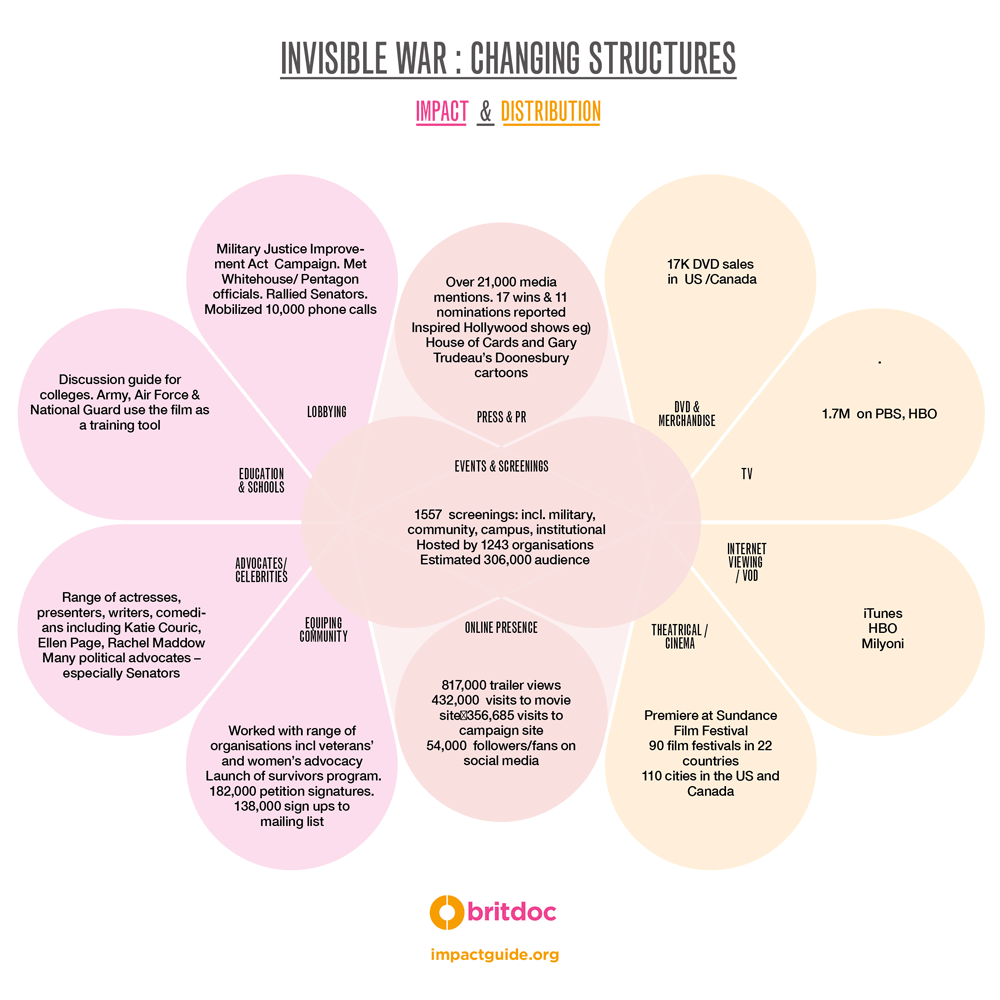 Other examples of 'changing structures' are Granito, The House I Live In and 9.70.

The Budrus team wanted to raise the profile of non-violent campaigners working towards peace in the Middle East by demonstrating how effective peaceful movements could be at creating change. Using ‘building communities' as their primary Impact Dynamic, the team focused on facilitating discussion and dialogue around the film's messages with those invested in the issues, both in Israel, Palestine and abroad.

Non-theatrical screenings of the film were a really effective tool for achieving their aims of reframing the conflict. The team also wanted to equip others inspired by Budrus to build their own non-violent movements for change, so much of their Impact Distribution activities focused on inviting others to arrange a screening, start a discussion group or even travel to the region as a volunteer. 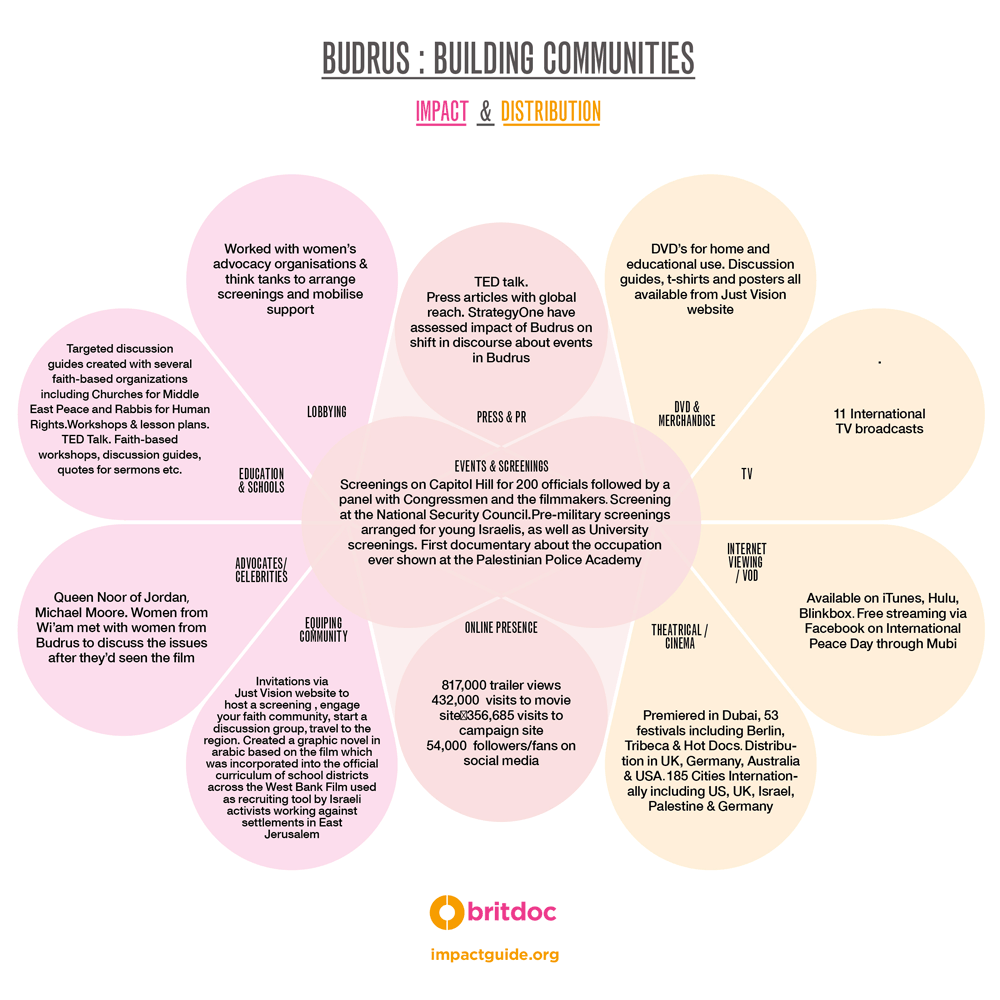 Another example of 'building communities' is American Promise and Please Remember Me.
Next Section
Made by